Introducing our variation of Asian style shrimps stuffing w/ eggplant in a thick and condense lobster sauce with infusing aroma of mint and/or basil, this recipe will sure to star up any party dinning table.

When it comes to Asian or Chinese cooking style, there some good combinations of flavors: sesame oil with shrimp, basil/mint w/ eggplant, or lobster sauce glazing on anything deep frying. This recipe of shrimp stuffing and eggplants makes uses of all the above pairings. That’s why it’s so bold, enticing, and would go good by itself, with rice, potato, or dipping breadsticks.

The secret ingredient here is baking powder, you may wonder why. It is added to shrimp instead of the usual salt to give a crunchier texture, more satisfying bites. Sesame oil was also there to enhance the flavor and scent while keeping the mixture from drying out.

I would prepare all the shrimp mixture then wrap and put them in the fridge to chill a bit since the shrimp tend to get done faster when frying. Just make sure to wrap the container tightly to prevent moisture loss.

Shrimp has natural sweetness (umami) in them, so really there’s nothing else needed as far as seasoning goes. But if you must, add a bit of mushroom/vegetable seasoning granules would suffice.

Onto eggplants, since the skin is a bit harder to work with, I would recommend using a serrate or tomato knife. First, I would slice them into an inch thickness, then I would go back and carefully cut through from side in. Slowly work toward the center to create a clamp shell type of opening.

If you’re not used to this, just do it slowly till the knife cut through 2/3 of the way, leaving the last 1/3 intact. Set them aside to make sure all excess water is dripped to avoid oil splattering.

Once done, go head and stuff each eggplant slice with the shrimp mixture and arrange them on a flat board or similar. Use a tong for easier handling cause the piece is kinda heavy.

Then I would preheat the oil before deep-frying stuffed eggplant for about 5 minutes or so. It’s easy to tell as the stuffing becomes pinkish while the eggplant turns golden. Do not over cook or the stuffing texture becomes more rubber when it dries out.

Once you are done with that, there are two ways to serving with lobster sauce. One is to prepare the sauce, add the shrimp stuffing and lightly cook them to make the eggplant rind soaked with sauce. This is great for serving hot immediately to the party.

Now, if you must prepare this in advance, I would keep the deep-fried stuffing separate, and sort of making the sauce on its own. Then right before serving, just reheat or lightly bake shrimp stuffing in the oven and lather the reheated sauce onto them.

Keep some chopped basil/mint leaves as spare for garnishment and finish with a dash or ground pepper. 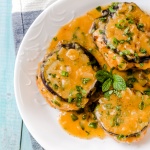 Prep Time: 30 minutes
Cook Time: 20 minutes
Servings: 8
Author: Victoria
Asian Fusion of the shrimp stuffing with eggplants – top with thickening slurry of lobster sauce and mint/basil as garnishment… The whole dish just smell so good, delicious and starred out any competition on the dining table.
Print