Corn milk is a delicious drink that could either serve hot or cold. As the name say, it’s made from boiling and grinding corn kernels, corn liquid extract and water. For creamier taste, most people would add whole milk, however, soy milk or coconut milk could be used instead as substitution.

This drink is so good to serve hot in the morning on chilly days. For summer lunch, try its icy-cold version instead.

Adding soaked or roasted nuts with some extra grains of salt add much more rich flavors to the taste. Pandan leaf is there for aroma but can be skipped or replace with vanilla extract as well.

Corn milk taste better when the corns were boiled before hand to remove the over-power essence. However, you could use raw corn as well, but this would be missing the boiling corn water from husk, cob, silk, and shank. This corn water is widely popular in Vietnam and other Southeast countries for detoxing and releasing your skin of toxic and impurification.

Any how, get your stocking pot and throwing in all the harvested corns you have left. Enjoy 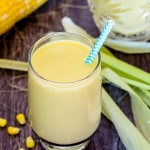