It’s May, the month of prom, mother day, memorial day, graduation… and father day coming afterward. Don’t you wish to celebrate these events with a luxury dish at the comforting spot of home? Try this Lobster Thermidor, though it takes some work to perform, the result will be outstandingly delicious that note your unforgettable day.

I have heard of Lobster Thermidor before, in a few of Julia Child versions, or maybe seeing it in the commercial show. My first encounter with Lobster Thermidor is not the real dish itself, but actually it’s being the ultimate dish to be learned at cooking level 10 in the Sims 3. It’s interesting how a computer game can replicate the cooking procedure to that extend.

To be honest, I’ve never tried this dish before my first try at cooking it, but nonetheless, the result came out quite perfect. Really, how could you go wrong with fresh lobster, herb, and creamy bechamel? I’m not a drinker, but the scent of cognac that added when searing lobster meat is just heavenly.

After many trials and taste sampling the surrounding, I came to my favorite version of Lobster Thermidor. What I like about it is that it doesn’t use much of any seasoning at all: just the natural sweetness from the juicy succulent lobster meat plus the mild saltiness of the cheese. A couple of drops of fresh-squeezed lemon juice is all you need.

No spice is being used in this recipe, not even ground pepper. I saw a couple of recipes with peppercorn, black pepper, cayenne… Though they all good, I just feel their flavor might cover bits of the natural fresh scent of lobster, as well as the nutty sweetness of cognac being blended into. So for me, no spice is better actually.

Go light on the salt since lobster meat is naturally well-seasoned on its own. If you can’t, for some reason, work with live lobster, try the tails. If so, just follow the recipe closely, but on the few finals step, put them all in a baking pan. Same way for any extra sauce/lobster meat too. For the cheese, if you can’t find any french, try parmesan or asiago.

All these tastes so wonder, which make me think of a light-up candle dinner. So have this recipe ready, prepare them in batches beforehand and bake them right before your gather up party. Oh, and don’t forget to get your treasured bottle of Cognac out. What a day! 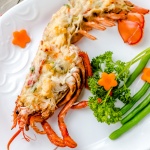 Extra sauce is perfectly paired with boiled/steamed green bean and carrot  as dipper. 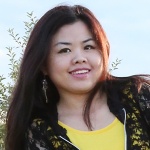